The Red Dot award-winning Z-Tech® series tugs were initially developed specifically for PSA Marine of Singapore. The design incorporates the best handling and operational characteristics of both Z-drive tractor tugs and Azimuthing Stern-Drive (ASD) tugs. Now often shamelessly imitated, but never equaled, the Z-Tech® series tugs are intended for operation primarily in major ports and marine terminals. The Z-Tech® design emphasizes the safe and capable operation of ship-handling operations with large ships, particularly those with extreme flares. Emphasizing the need to work in either a push or pull mode under the flared ends of large container ships and car carriers, the Z-Tech® has a relatively low forward sheer, and a wide, heavily fendered bow. The wheelhouse is set well aft and inboard, offering excellent visibility over the entire working deck and to the sides. With the low bow, the tug is designed to make transit or open water voyages stern-first in “tractor mode”. Accordingly the Z-Tech® tug then functions very efficiently with only one winch, located for maximum efficiency for both ship-handling and towing operations. The Z-Tech® has been selected by the U.S. Navy as the best tug solution for several of their major terminals, especially well-suited for handling submarines and aircraft carriers. The Z-Tech® was also selected by the Panama Canal Authority as an optimal tug configuration for their operations.

Z-Tech® tugs are classified according to their length and bollard pull. 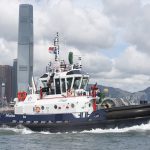